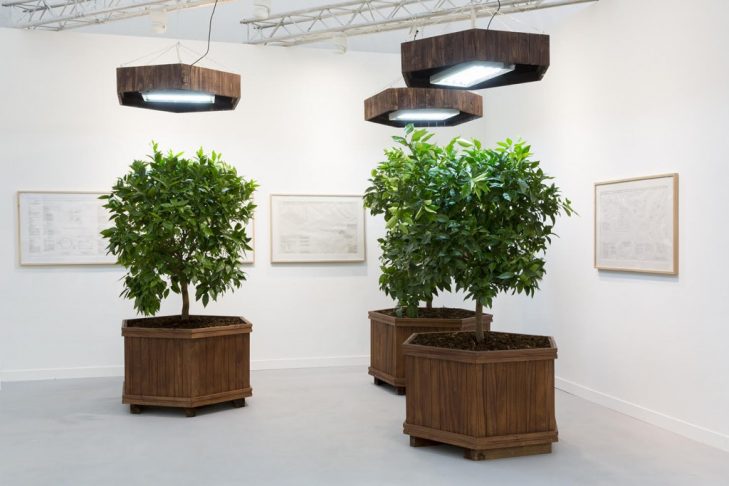 The 2017 London Frieze Art Fair was a huge success and Agrumi helped one exhibitor gain a coveted Focus Stand Prize.

Various Small Fires (VSF) is a small Los Angeles-based gallery that acts for a number of artists of international standing, At Frieze this year the gallery chose to showcase a work by Helen Mayer Harrison and Newton Harrison (collectively known as ‘The Harrisons’).

The Harrisons live in Santa Cruz, California and pioneered the Ecological Art Movement back in the 70s. The movement promotes climate change solutions through art and their Survival Piece V Part II: Lemon Orchard Fragment is an early work dating from 1972.

This installation features lemon trees growing under photosynthetic lights and was originally intended to have dual meaning. Firstly, it acted as a critique of human kind’s influence on the planet’s ecosystems and secondly, it was a practical experiment for the indoor cultivation of fruit in a post-agricultural future. 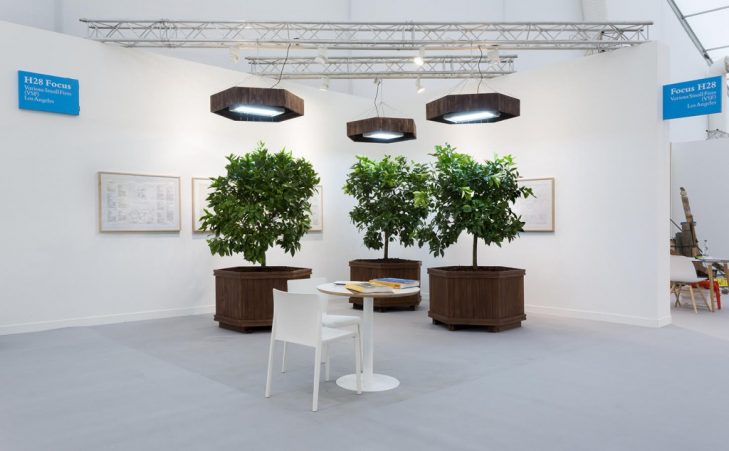 VSF chose to partner with Agrumi to re-create Survival Piece V Part II at Frieze in October. We sourced and planted Meyer lemon trees (a particularly hardy citrus breed) in specially constructed tubs that were then co-located under photosynthetic lights.

The look of the whole installation exactly replicated the appearance of Survival Piece V Part II as it had originally appeared over 40 years ago – although on a smaller scale. The installation was completed with surviving drawings and other ephemera from the 1972 original and visitors were again able to walk among the trees as they had done before.

The ‘portable orchard’ caught the eye of the Frieze judges (Richard Parry Director of Glasgow International, Christopher Lew Curator of the Whitney Museum and Hanne Mugaas Director of the Kunsthalle, Stavanger) and won the Focus Stand Prize.

This coup for VSF and Agrumi was doubly rewarding. Not only did it recognize the hard work that went in to bringing the installation to life again, it also allowed us to promote a serious ecological message. Following their sojourn at frieze the Meyer lemon trees have been replanted in an orchard.

If you need something green on your trade stand then get in touch!